When was the era for the 1990s Target neon, the one with four colors (red, blue, yellow, green) and the "Food Avenue"? Obviously, it was gone by 2001, and not there yet in 1988 (the Gold Circle/Richway conversions didn't have it). When were there time? I know they were there at least 1992-1995, but the window has to be larger than that.

Anyone know for sure?
Top

Well, the Greatland concept was rolled out in the year 1990, so it probably coincided with that.
Top

Ephrata1966 wrote:Well, the Greatland concept was rolled out in the year 1990, so it probably coincided with that.

It was probably used in the Greatland stores before the regular Target stores then. The Kelso, WA Target store, which opened in 1990, did not have neon on the inside until its first remodel.


pseudo3d wrote:Some of the stores had the red/blue/green striping on the outside. My 1992 Target did not, but I think it was seen at least from 1995 (RAM) to 1998 (Golf Mill). I remember one in Conroe built circa '98 that had it too on the outside.

I have actually NEVER seen a Target with the neon on the outside.
Top 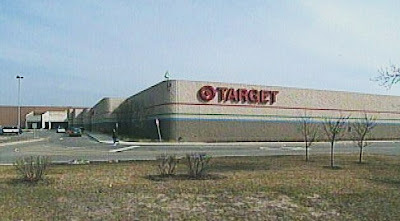 (not the best picture, but it will do)

The Redmond WA Target store (which opened in late 1995 as a Target Greatland) originally had the neon when it opened until it remodeled to the current design package around 2008 or so (then subsequently remodeled again to PFresh last year.) The Factoria Target in Bellevue (non Greatland) opened around 1990 or so and also had the neon, which remained until it too got remodeled to PFresh last year. I don't recall either of these stores ever having colored stripes on the store exterior.
The Sledgehammer - Version 2.0 - Seattle Area Malls, Retail History, and other random things.
Top

I imagine the first generation SuperTargets had neon and the like on them as well.

Interesting that it started in 1990: the 1989 Gold Circle/Richway conversions did NOT have neon.
Top

I am pretty sure that the Neshaminy / Bensalem, Pa. location also had the neon when it first opened in 95 ish as a Greatland as well
Top

Most likely this has already been asked at least once on this site, so I apologize for not searching for it. My question, though, is... do any Target stores still have garden aisles? I remember Target stores in the 90's having garden aisles in seemingly random spots, instead of the more traditional, much larger garden centers outdoors seen at Walmart, Kmart, Home Depot, and Lowe's stores.

Also, do the Target stores in Texas (or Houston more specifically) have Pizza Hut Express as a snack bar feature? I first learned about the Target/Pizza Hut partnership upon moving from Greater Houston to Greater Philadelphia in 2000, by wandering into a Target that just happened to have opened in 1997, making it perhaps one of the last new buildings to have an application of the old Pizza Hut logo. The only Target stores in Houston that I ever visited were from the 80's (well maybe very early 90's), so from my own observations I was unclear whether Pizza Hut at Target was a late 90's innovation or whether it was only a Northeastern concept.
Top

I think Target has deleted all garden centers. The ones near me in Northwest Florida that still retained them closed them a couple of years ago. They have some garden items, especially their Smith & Hawken line, in the main store in the outdoor living/patio furniture area. They no longer carry live plants or much in the way of fertilizer, plant food, and other lawn chemicals. It seems as if there was a piece in the newspaper and a mention on chainstoreage.com about the discontinuing of the garden centers.

The Pizza Hut Express operations have replaced most of the Food Avenue or generic snack bars in the Target stores in Northwest Florida and in Mississippi, so the concept definitely dips into the South.
Top

(not the best picture, but it will do)

Sidenote, I was in Plainfield, IN (outside Indianapolis) on business a couple weeks ago. and the Target there not only has the colored stripes outside, but STILL has the colored neon with white department signs with the colored stripe on the bottom. Seems pretty rare to have a Target store so much out of date, by 2 or 3 designs.
==========
Aaron
"his foxtail-wielding skills are unparalleled, dust bunnies fear his name"
Top

I was in the Target on Miller Rd. in Flint just last week, and it still had the red-yellow-blue-green neon and overhead "arrow" signs. According to a listing, it opened in 1988. Last I checked, Saginaw still did, too. I'm surprised at this, since the one at Bay City Mall was one of the first in Michigan to take on the latest design.
Top

I think the Dubuque store had it for a while - they had been remodeled for the first time since opening back in the early 90s. They underwent some further remodeling a couple years ago which entailed the reconstruction of the front of the store. The neon was gone then. There was even more remodeling last year they moved several of the departments - electronics, toys, kitchen stuff - around while opening a new expanded grocery section in the store.

I'd have to look at the Super Target in Davenport, I think it still has the 90s neon. Not 100% sure though.
Top

pseudo3d wrote:When was the era for the 1990s Target neon, the one with four colors (red, blue, yellow, green) and the "Food Avenue"? Obviously, it was gone by 2001, and not there yet in 1988 (the Gold Circle/Richway conversions didn't have it). When were there time? I know they were there at least 1992-1995, but the window has to be larger than that.

Anyone know for sure?

Food Avenue was updated around 1996
Top

The Target in Greenacres,FL opened in 1998
originally had neon inside, a pharmacy, the electronics we're maybein the front, middle, or the back, the Food Avenue
originally was a Pizza Hut Express until 2001 , when it was replaced by a regular Food Avenue,the store remained unchanged until 2010
when it was remodeled into a PFresh Target, except the exterior which had
90's neon outside as well it also remained until the repaint in 2009/2010

The Target in Royal Palm Beach ,FL opened in 1992 from a relocation from an older Richway off Military and Forest Hill .
The 1992 store had a Food Avenue the same that Des Moines, Southridge still has one, but the RPB, location was removed and was replaced/redone in 1998 ,to the same style/design that Greenacres, FL still has , as of 2010 was repainted
the RPB location had the same entryway and storefront Des Moines, Southridge still does , the RPB store was a updated the 1990's version of the 1985/6 prototype