Through the course of this thread, I've cycled through most of the larger chains that have done business in Milwaukee over the last 90 years. Now it's time to cover what was once the biggest chain of them all: A&P.

According to the table, no fewer than 234 A&P stores existed in and around Milwaukee between 1930 and 1979. More than two-thirds of these locations were small neighbourhood stores from the pre-supermarket era, housed in small storefronts in pre-existing buildings. One of the few exceptions may have been 4735 W Center St, a small single-story building constructed in 1929 that may have housed an A&P from day one. (This store is listed as 5830 in the 1930 column.)

Combing through Milwaukee A&P locations on Google Maps in chronological order, I was overcome with a sense of deja vu...since the company's store development in Milwaukee paralleled their patterns in Greensboro, NC! One difference I noticed between A&P in Milwaukee and their development in smaller cities, however, was that their late 1930s/early 1940s consolidation into larger supermarkets was more gradual: The company kept a small handful of 1930s-era stores open into the 1950s and even 1960s. 2018 S 1st St in the Bay View neighbourhood seems to ahve been the last one standing.

The post-1930s supermarket era is where my interest in historical A&P locations picks up. A few of these in the 1940s continued to open in the storefronts of multi-story buildings, but most were stand-alone. A fair number of stores from this era have been demolished, but others survive, and a few locations are special enough to warrant specific mention:

* 1314 W Mitchell St. A small store that opened by 1940, closed by 1950, and still survives with original upper-wall edging and floor-to-ceiling windows. David snapped a photo of this one.

* 911 N 27th St. This might be the nicest A&P artifact in all of Milwaukee: A well-preserved building with an intact porcelain enamel tile facade and a "hump" on the front wall where the A&P roundel would have fit. The city assessor says it was built "about 1940." Now the home of Mattress City.

* 3103 S 13th St and 2670 N Buffum St. These stores are very similar, and both are examples of larger, later (circa-1950) A&Ps with corner entrances that survive intact. Both stores also appear to have been built with front and back doors in an effort to give pedestrian sidewalk access and parking lot access equal priority.

* 3565 S Howell Ave: An improbably sleek and modern non-Centennial store that opened by 1960. David took a picture of this one, too.

* There are also three 1940s and 1950s stores that were given Centennial roof-peak facelifts in the 1960s and still survive as such: 7924 W Buleigh St, 7326 W North Ave, and 430 W North Ave. (I'm a sucker for Frankenstein stores with visible traces of multiple eras.)

* And speaking of Frankensteins: Here's 6901 W. Oklahoma Ave., a 1956-vintage store that got an ugly 1970s mansard makeover, and now houses American Science & Surplus. The most remarkable thing about this property is that the current tenant reused the 1970s capsule-shaped A&P signframe! I wonder if this is the only trace of that logo left in Milwaukee?
"The pale pastels which have been featured in most food stores during the past 20 years are no longer in tune with the mood of the 1970s."
Andrew Turnbull
Top

A&P still had a heavy presence in Milwaukee in the 1960s, and they built quite a few new centennials in the city as well: 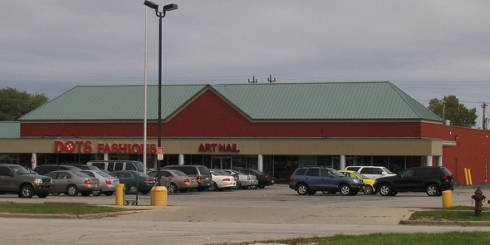 * 3736 S 27th St. This may have been the first of this breed in town, opening on November 4, 1958. Here is the grand opening ad that appeared in the Milwaukee Journal. It's also the second-oldest Centennial store anywhere I've been able to put a firm date on. (Over in this old thread, Max dredged up a Centennial in Wickliffe, Ohio that opened in September 1957.)


* 8721 W Fond du Lac Ave. Opened by 1964. Now home of an abandoned shopping centre, with the centennial roof rising up eerily from the centre of the "ruin."

Today, this building houses a post office. And surprisingly, the weathervane is still intact after all these conversions.

* 3023 W Greenfield Ave. Pseudo-centennial store (with peak, but no pitched roof), built right up to the street, that looks like a retrofit of a 1940s-1950s store. Yet, the address doesn't show up until the 1970 column of the table...and the city assessor says the building was built in 1966. Mysteries...

* 2718 S Logan Ave. Opened by 1970. Now a BMO Harris Bank branch, with a drive-thru jutting out of the front! David captured a shot of this during his research trip: 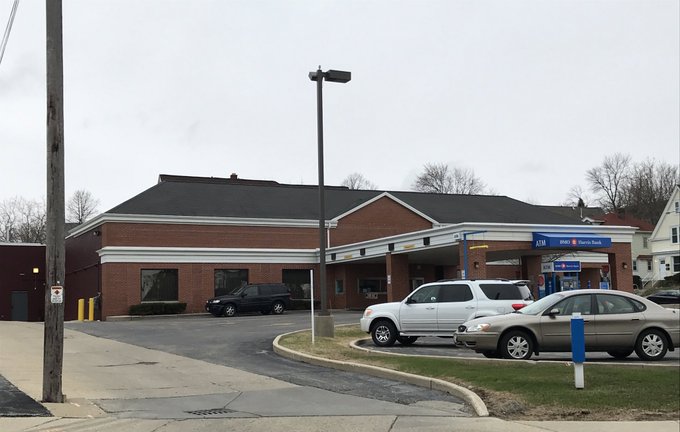 What about post-centennials? That's where the architectural record starts to break down. Even though A&P lasted in Milwaukee and Wisconsin until 1979 (and buoyed its store count by buying some of National's cast-offs in 1976), their local operations in the 1970s were in decline and very few post-centennial stores were built. In fact, I know of only one post-centennial 1970s-built A&P store in Milwaukee: 7210 N 76th St, which is decked out in a generic 1970s façade and is now home to a private school. Maybe there were others, but it'd take a thorough comb-over of a 1978 or 1979 location list to know for sure.
"The pale pastels which have been featured in most food stores during the past 20 years are no longer in tune with the mood of the 1970s."
Andrew Turnbull
Top

An additional Milwaukee County A&P Centennial store existed at 3100 E. Layton Ave. in St. Francis, and it opened on December 17, 1959. The building survives as a Value Village thrift store. This location isn't contained in the table, however, because the Milwaukee directory publishers consistently excluded St. Francis, Cudahy, and South Milwaukee from their coverage.

Here's a location list I found from December of that year. Of the "nine convenient stores" listed, seven were in Milwaukee County. Three were centennials, four were '50s pre-centennials. Three (10635 W Greenfield, 1578 S 11th, 2210 S 13th) are now demolished.

A&P was selective in the way it made use of the A-Mart format in Milwaukee. To begin, they didn't convert all their stores, or even most of them: A&P had about 31 stores in 1970, and less than a fifth got the A-Mart treatment. None of the locations that were converted were the newest stores in the chain: Only one had opened after 1960. A-Mart seems to have been a strategic tactic to try to maintain Milwaukee marketshare by driving up volumes in older large-format stores that were starting to look dated and tired...as Kohl's, Sentry, and various Roundys-affiliated outfits moved into neighbourhoods and stole shoppers away.

Did it work? Judging by A&P's lack of subsequent Milwaukee store development and their 1979 exodus from the state...no!

I'll pause there, because I'm having a monologue by myself. It's a shame this forum doesn't attract the buzz of social activity among us that it did ten years ago...even though there are more topics and leads of information to discuss than ever before.
"The pale pastels which have been featured in most food stores during the past 20 years are no longer in tune with the mood of the 1970s."
Andrew Turnbull
Top

A-Marts simply were low volume stores. The early centennial in Wickliffe was one of the first--it was in an odd location--near Wickliffe's tiny old downtown but not someplace that had a lot of complimentary businesses nearby. Within 2 or 3 miles of another A&P, 2 Fisher-Fazio's and a Pick-n-Pay. The closest A&Ps to it were not converted and were much larger. They did close a small store in the nearby town of Willoughby around then.
Top

They did build small centennials that were less elegant and complete in design than the full sized one. I think these were 13,000 sf and went into urban neighborhoods or small town downtowns with parking on the side rather than in front. That might be what your 1966 store was. There was one in Cleveland on St. Clair near 105th but the last time I went looking for it the property had been redeveloped.

They also attached centennial elements inconsistently to stores that were part of shopping centers where the location of store (in the middle of a line of shops) did not permit a full-on centennial design. The A&P at Congressional Plaza outside of DC was an example. The opening for Congressional is difficult to pin down--anywhere from '58 to '61, so clearly in the early centennial era. They occasionally did this as a retrofit, but didn't do it with our A&P which had been acquired from another chain in the early centennial era.
Top

Harking back to another thread, a good example of a small and "inelegant" A&P Centennial is 15061 Houston-Whittier in Detroit. This is an out-of-proportion store with very narrow frontage. It faces its parking lot, but only because it's been crammed sideways into a small lot with the side wall touching the sidewalk. David thought it was a retrofit, but official property data says it was built in 1959.

Our Milwaukee oddity at 3023 W Greenfield is the same size, and it seems to have been a similar case of site constraints in a dense area dictating all.
"The pale pastels which have been featured in most food stores during the past 20 years are no longer in tune with the mood of the 1970s."
Andrew Turnbull
Top
Post Reply
37 posts